Drivers can Pledge to – stay under limits, slow down to 30km/h around schools, homes and shops and roadworks to protect others, slow down to 20km/h when passing stopped school buses, slow right down for bends, brows and bad weather, and avoid overtaking.

Everyone can Pledge to – speak out for slowing down and help drivers understand that the slower they drive, the more chance they have of avoiding a crash and saving a life.

Driving slowly is one of the most important things drivers can do to protect themselves and others. That means staying well within limits, slowing down to 30km/h around homes, schools and shops, slowing right down for bends, brows and bad weather, and avoiding overtaking.

It’s essential to safe and considerate driving because slowing down gives you much more time to react to people and hazards around you, and avoid hitting someone or something. Slowing down helps make our communities safer, healthier, and more liveable, and can mean the difference between life and death in an emergency.

Limits are limits, not targets

Stay well under limits, rather than hovering around them. Look out for signs, including temporary limits around roadworks and schools, and obey them, regularly glancing at your speedo. Know which limits are usually in place on different roads (see the Road Code) and if unsure, err on the side of caution and slow down. It will help you stay safe and avoid fines and demerit points.

Keep at least a two-second gap (four in the wet) behind the vehicle in front on any road, but especially at higher speeds – it’s your braking space in a crisis.

GO 30 in towns and communities

Sometimes the speed limit is too fast for safety. New Zealand's default speed limit in urban areas is 50km/h, although some local councils have implemented 30km/h limits in towns to protect people on foot and bike. There are also widespread 40km/h speed limits outside schools during school drop off and pick up times.

Drivers can make a big difference now by committing to GO 30 in all communities: slowing down to 30km/h around communities, schools and residential areas, even where the limit is 50km/h. You'll help make streets and communities safer, greener, more pleasant places.

At 30km/h, your stopping distance is about half that at 50km/h, so GOing 30 makes a big difference to safety, but it won't be a big inconvenience. Your journeys should be smoother and use less petrol, and your journey times are unlikely to be significantly longer. Give yourself time to react in an emergency, such as if a child runs out. 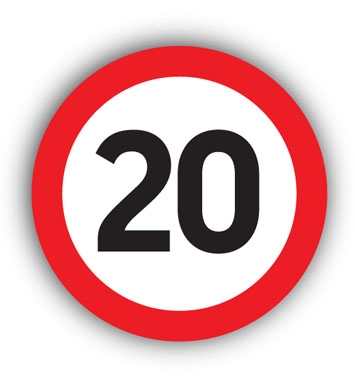 Children are some of our most vulnerable road users, and they sometimes make mistakes. They don't deserve to pay for it with their life.

If passing a school bus, no matter which direction you're travelling in, you must slow down to 20km/h - it's the law! Also keep a careful look out for children who might run out from in front or behind the bus without looking.

Rural roads are often bendy and narrow with poor visibility and hidden junctions. Even if you know the road well, you never know what's around the corner. The majority of driver and passenger deaths happen on rural roads, often due to drivers taking bends too fast, overtaking, or not being able to react to unexpected hazards.

That's why slowing down on rural roads is crucial. The derestricted limit (100km/h for cars and vans) is generally far too fast for safety - so stay well beneath this and slow right down for bends, brows, dips and junctions, in bad weather, and if you suffer sunstrike. You should be able to come to a stop within the space you can see.

Rural roads are still shared spaces, and slowing down on them also helps people to enjoy the countryside, and people in rural communities to get about, by being able to cycle, walk and horse-ride without being endangered.

Slowing down - or avoiding driving altogether if you can - is crucial to staying safe in bad weather. Driving in wet or icy conditions significantly increases your stopping distances, while fog and mist make it far harder to react to hazards. Read our ABC of bad weather driving.

Overtaking on single lane roads is incredibly risky and should be avoided. It is impossible to accurately judge the speed of approaching traffic, or the length of empty road in front of you, and when overtaking this can be fatal. The gap between you and oncoming traffic disappears surprisingly fast. If you and an oncoming vehicle are both driving at 100km/h, the gap between you is closing at 200km/h, or 60 metres a second. So a small error in judgement can easily result in multiple deaths.

That's why it isn't worth the risk. Often overtaking makes little difference to your arrival time, but could mean you or someone else never arriving at all. So never overtake on single lane roads unless absolutely essential, such as because you need to pass a stationary or extremely slow moving vehicle. Only then do so if certain there's enough space to get past without speeding and with no risk of someone coming the other way. Otherwise just hang back and relax. 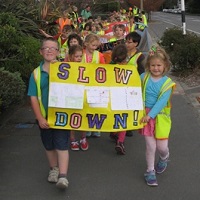 Some drivers use all sorts of excuses for speeding: they don't notice their speed creeping up, they feel pressured by other drivers, they're in a rush, or think they can handle it because of their fast reaction times and good brakes. The fact is slowing down is essential to safe driving, no matter who you are or what you're driving. Studies have proven the link between speed and safety: reducing average speeds leads to fewer crashes and casualties, and if you speed, you're far more likely to crash.

In short, slowing down is vital to safety, especially in protecting our most vulnerable road users like children, and enabling people to walk and cycle without fearing for their lives. And it's not a big ask. All drivers should be able to keep an eye on their speed, and protecting people should always be the priority over getting there a few minutes faster.

Fun ways to
support our work

Keep in touch
via social media
or our bulletins

Low-cost events
and resources
for employers

to our Gold
Partners